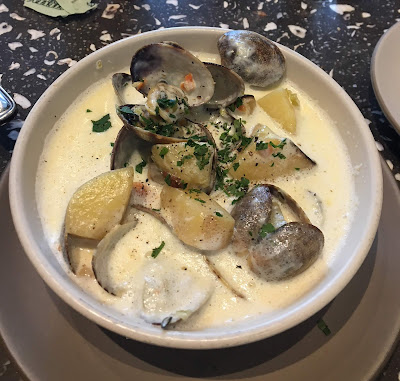 The oysters at Hog Island may be splendid, but I don’t eat raw fish, so you won’t find an oyster review here. No, this is about the best clam chowder I’ve ever consumed. Hog Island’s Manila Clam Chowder is not the flour-thickened mush with tiny canned clam bits and too many potatoes that most places serve--the kind that’s been sitting on the stove staying warm for hours. Instead, you get an exquisite bowl of clams in the shell, surrounded by cream with red potatoes, butter, a little bacon, and seasoning that is perfect, cooked up while you wait.

Hog Island at the Napa Oxbow was busy at lunchtime, but this was not my first round of their chowder, so I ignored my hunger, summoned my patience, and watched cook Miguel do the honors. For each serving he grabbed from cold storage a couple of handfuls of clams and tossed them in a buttery sauté pan with a scoop of cooked potatoes, leeks and herbs. Once the mixture was nice and hot, he tossed it to blend, then added the cream and let that bubble up before placing all with great attention into a bowl. Since I’ve never had chowder like this anywhere else, including New England, I asked the very French chef Rémy where the recipe originates. He referred me to the restaurant chain’s website.

I exchanged emails with the folks at the farm in Marshall, a little over an hour west of Napa and heard back from Brenna, who informed me the recipe came from one of the founders, John Finger, more than thirty years ago. John was from Long Island and while planting his oyster beds in Tomales Bay, he duplicated the chowder his mother had made: clams from the sea and veggies from the garden. Hog Island still follows the philosophy of fresh produce and seafood. The recipe for their chowder can be found at hogislandoysters.com/oysters/recipes. And even if you think you’ve had superb clam chowder elsewhere, give this a try when you’re in Napa or San Francisco. You won’t be disappointed.
Posted by Hungry Lenore at 2:52 PM