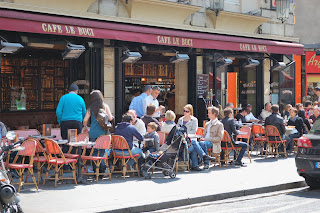 If you know I've been to Paris and are waiting on the edge of your computer chair to hear the juicy details, this is for you.  Exhausted from walking and waiting in long lines at every museum and attraction, I couldn't be sure I'd find the energy to write anything but a diary of whining, as opposed to wining. Jet lag did, however, provide  time in the middle of the night for writing, exhausted or not.
With the pathetic value of the dollar in Paris, I didn't pursue any fine dining, unless you include lunch at the Paris Rotary Club, which was delightful, but cost me sixty euros, or $90. The club of  250 meets at the Port Dauphine Pavilion, which is a lovely tent-like place, also used for weddings, on the edge of the Bois de Boulogne. Of the 250, there are only fifteen women, so I was surrounded by attractive men in suits and ties. I joined a round table of eight and truly enjoyed the conversation--some of them spoke English--until the food was served and the start of the business meeting demanded silence. On my right sat a gent who spoke no English, but proudly told me in French he was eighty-five years old--and in pretty good shape, I would say. On my left a charming middle aged fellow arrived late and regaled me with stories of his vacation in southern California, when he tried to rescue an injured pelican, keeping it in the hotel bathtub while he exhausted all known sources of rescue. He found it painful, because his young daughter was with him, when the SPCA told him they could only put the bird out of its misery. So he left the pelican behind in the bathtub to be dealt with by hotel staff.
Back to the pricey food. First the waiter delivered a lovely and substantial salad--a wedge of tender lettuce leaves decorated with crab and a few tiny shrimp, then covered with a tangy pink dressing. I was so busy talking, I had to quickly finish mine as my tablemates' plates were whisked away. I noted that every one of them cleaned his plate--a hungry bunch,  or maybe they were trying to get their 60 euros worth. The main course came, a piece of chicken, nicely cooked, but just chicken, and some rice studded with something red--chopped pepper or pimento. Boring! I couldn't identify the dessert, but it was muffin-shaped and mocha-flavored, partly frozen, served with a slice of kiwi, raspberries, caramel sauce, shaved chocolate and what I thought was a tiny cherry dipped in chocolate, waving some dried green leaves like a flag. Pretty tasty. And of course the wine flowed freely, both red and white from Bordeaux.
For the rest of my Parisian food consumption, I relied primarily on cooking in my tiny apartment, a challenge considering the only cooking utensils were two small pots without lids. I also lunched in various cafes.  I had a delicious Soupe à l'Oignon one chilly afternoon at the Victor Hugo café,  close to the house where the writer lived in the Marais. Before tackling the horrendous lines at the D'Orsay museum, I fortified myself at the Buci Cafe in St. Germain, just down the street from my apartment. Their quiche was rather unrefined--two inches tall, dense, and filled with chunks of salty ham. Another day,  after waiting in line to see St. Chappelle--only to discover that the main room with the glorious stained glass was closed for renovation, as it was on my last visit, I dashed across the street to another café to soothe my soul with a simple but perfect plate of salmon, boiled potatoes and spinach with crème fraȋche. Do you hear the whining coming through?
I had some yummy take-out desserts, including the macarons from Ladurée. I managed to cut in line at the famed patisserie without knowing it, making me feel like a real Parisienne. I bought two cookies without gasping at the price of over eight euros. Cookies at $6 each--that's twice what Bouchon charges. They were pretty amazing cookies, one filled with an intense  high percent cocoa cream, the other oozing with caramel. However, I had no desire to deposit any more euros at Ladurée.
I warmed my cold hands with a rich cup of cocoa in a crèpe place late one afternoon after a long walk in a chilly wind. Most nights at home, I refreshed my spirits with a dry, slightly alcoholic cider that I brought home from the grocery store and carried up six flights of stairs. Then one night I  dropped one of the bottles and, happy it didn't break, removed the cap to have the bubbly stuff explode all over the walls and ceiling of my tiny kitchen. I also visited the Starbucks in St. Germain, where the latte was four euros, and the cute baristo told me Parisians love Starbucks because "they love everything American." He also said their fare is the same as in the U.S. "but we have pancakes!"
Most of my contacts in Paris were with indifferent waiters and ticket sellers. A few lovely gentlemen came to my rescue as I struggled with my luggage on stairs. I would have liked to grab the rugged gray haired fellow coming out of the Metro who skipped up the steps to pick up my monster bag and then carried it all the way down several sets of stairs to the turnstile. But I was on my way to the train station and the mysteries of eastern France, Germany, and Austria. New adventures awaited, of both the social and culinary varieties.
Posted by Hungry Lenore at 6:49 PM No comments: